Initially, Shivapuri National Park, gazetted in 2002, covering an area of 144 km2 was renamed as Shivapuri Nagarjun National Park (SNNP), after the addition of Nagarjun forest patch (15 Km2) in 2009. Geographically Shivapuri forest located within 27°45’ to 27°52’ N latitude and 85°16’ to 85°45’ E longitude and Nagarjun forest is located within 27°43’ to 27°46’ N latitude and 85°13’ to 85°18’ E longitude. It covers parts of Kathmandu, Nuwakot, Sindhupalchowk, and Dhading districts of central Nepal and elevation range from 1350 Meters to 2732 Meter above mean sea level. It is only the protected area that represents flora, fauna, and the ecosystem of the Middle Mountain. It is situated on the Northern fringe of the Kathmandu valley and the park head office is located in Panimuhan, Budanilakantha municipality of Kathmandu district.

The park area is surrounded by a heavy sub-urban population. The Buffer Zone (BZ) of Shivapuri Nagarjun National Park was declared in 2016. The objectives of BZ is to conserve and manage forests to fulfill the daily basic needs of the local community residing in the periphery of the Shivapuri Nagarjun National Park. It covers an area of 118.61 km2, which covers part of

Kathmandu, Nuwakot Sindhupalchok and Dhading districts. There are 14,558 households with a population of 79,776 residing in the BZ. The National Parks and Wildlife Conservation Act, 1973 has made a provision of plowing back 30-50% of the Park’s revenue into community development and conservation of the buffer zone.

The major attractions of the park are a scenic view, biodiversity, forest environment, wilderness, avifauna, spirituals fitness, religious sites, trekking, and hiking. The people around the park follow Hindu and Buddhist culture. A visitor can enjoy Aryan and Mongolian culture. Shivapuri peak is a holy place for both Hindus and Buddhists and the source of holy rivers Bagmati and Bishnumati. SNNP has important pilgrimage destinations including Bagdwar, Bishnudwar, Jamacho, Buddha Gupha as well as Manichur Mahadev, Kageshwori, Sundarimai, Baudeshwor, Tarkeshowr, Pachali Bhairav, and Nagi Gumba, that provide opportunities for recreation, hiking, spiritual fitness, and wilderness. The Kathmandu based tour/trek operators conduct regular tourism activities like a day-hike to Shivapuri Peak, viewing a snow pear panorama of other Himalaya and visit Nagi gumba. The other popular activities within the park are bird watching, jungle walk, cycling, hiking, and trekking.

Getting into Shivapuri Nagarjun National Park

The park is virtually surrounded by a 130 km long stone wall, having 95 km long graveled-road and 83 km foot trails constructed for trekking. There are few hotels/lodges in the buffer zone. Trained and experienced nature guides are available in different entrance gates. 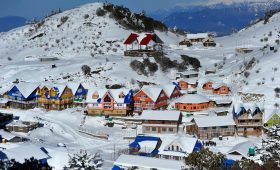 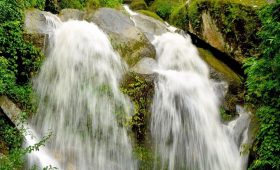